Did you know that you can sponsor newcomers as a group? By being a part of a sponsorship circle, you can help newly arriving individuals meet more people within the community. Through group sponsorship you can divide up the work of welcoming within your circle, making it easier!Learn more about group sponsorship at ukraine.welcome.us. Read more 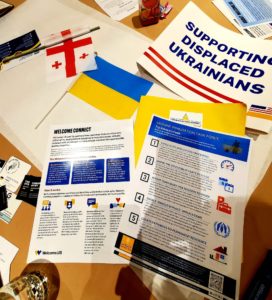 The Ukraine Immigration Task Force proposes the following regulatory actions to ensure safety and security of Ukrainian citizens seeking refuge in the United States: Proposed Regulatory Action 1. Redesignate Ukraine for TPS as soon as possible and simultaneously extend the current term eligibility date to January 1, 2023.  Problem: Many B-2 visa holders and humanitarian parolees were only able to come to the U.S. after April 11. In fact, some of the largest waves of Ukrainians who entered through Mexico between April 12 and April 25, with a trickle of families who were admitted later after being detained. Those present in the U.S. on a B-2 visa risk overstaying their 6-month allowed stay, while those admitted at the Mexican border were only granted humanitarian parole for one year.  Policy Justification: The simultaneous extension and redesignation are warranted because the extraordinary and temporary conditions supporting Ukraine’s TPS designation remain. Moreover, recent intervening events such as escalated terrorist attacks, annexation of 4 provinces, the imposition of martial law, and increased permanent displacement in most population centers warrant urgent action for immediate redesignation. This makes return to Ukraine impossible for millions of persons displaced or unable to return to a Ukraine-controlled territory. Since Russia’s invasion of Ukraine on February 24, 2022, the occupying military regime has widely committed human rights violations and abuses, […] Read more 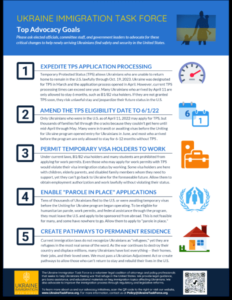 The Ukraine Immigration Task Force is honored to have participated in the first Ukraine Action Summit! https://www.americancoalitionforukraine.org/summit Our hardworking delegation accomplished its mission to promote efficient immigration pathways for those seeking refuge, provide new arrivals with tools for self-sufficiency, and advocate for protection of vulnerable individuals and families. We held several productive meetings with Members of Congress to educate them on immigration issues and propose solutions to challenges faced by displaced Ukrainians. Some of our members also met with State Department officials. And, we collaborated with numerous amazing organizations advocating for a full spectrum of Ukrainian causes. We plan to keep up the momentum in our upcoming Ukrainian Days Advocacy Event in November! Read more Petition LIVE NOW at Change.org Alert the Biden Administration and Members of Congress about the serious danger of exploitation and victimization facing over 160,000 newly arriving Ukrainians, Afghans, and other vulnerable individuals in the United States due to their lack of access to lawful employment opportunities. Please read the petition, sign it, and share it with your networks! Sign Petition     Read more

Immediate Employment Authorization for Ukrainians: Background and Talking Points Numerous articles written in recent years have highlighted the dangers of exploitation, abuse, and victimization for individuals who are not allowed to work lawfully. This is not specific to Ukrainians, nor is this a new problem. What’s different about the crisis facing newly arriving Ukrainians is the magnitude of the problem, which is compounded by several factors. The Ukraine Immigration Task Force has taken steps to try to address this crisis with at least a temporary solution that would get hundreds of thousands of recent arrivals working legally as soon as possible. Read more